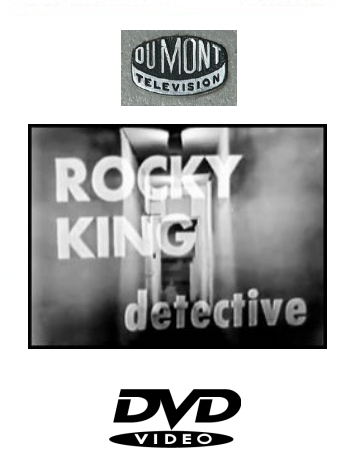 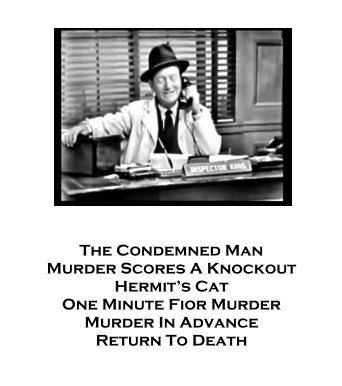 ROCKY KING Syndicated (30min) One of the longest-running programs on the DuMont network was Rocky King, Detective, known in its early years as Inside Detective. In many ways, Rocky King represents both the good and bad of DuMont programming. At the same time, Rocky King, telecast live on DuMont, was full of miscues and flubs, and was produced on a small budget. Critics described Rocky King as having a "lighthearted, 'nobody's watching anyway' attitude." It never had the chance to attain top nationwide ratings, due to DuMont's limited station lineup and severely restricted production values (you never saw a big-name guest star acting in a Rocky King episode!) Of the hundreds of Rocky King programs which were telecast by DuMont, only a handful of kinescopes survive today, most of them at the UCLA archive.  As the program opens and the opening titles are shown, Roscoe Karns (as Rocky King) walks toward the camera from the opposite end of a long, dark hallway. This is too realistic and atmospheric to be a set or flat, and the author believes it must have been an actual hallway at the DuMont Tele-Centre in New York. The theme music plays (composed and performed on the organ by Jack Ward; most of the low-budget "live" DuMont shows seem to have organ music as accompaniment), and the voice-over sets the tone for the next half-hour: ANNOUNCER: Rocky King, Detective! Starring Roscoe Karns as Rocky King, chief of homicide of a metropolitan police force, in an exciting fight against crime! Brought to you by Geritol! HERE ARE 6 OF THE NEARLY IMPOSSIBLE TO FIND EPISODES The Condemned Man Murder Scores A Knockout Hermit’s Cat One Minute Fior Murder Murder In Advance Return To Death