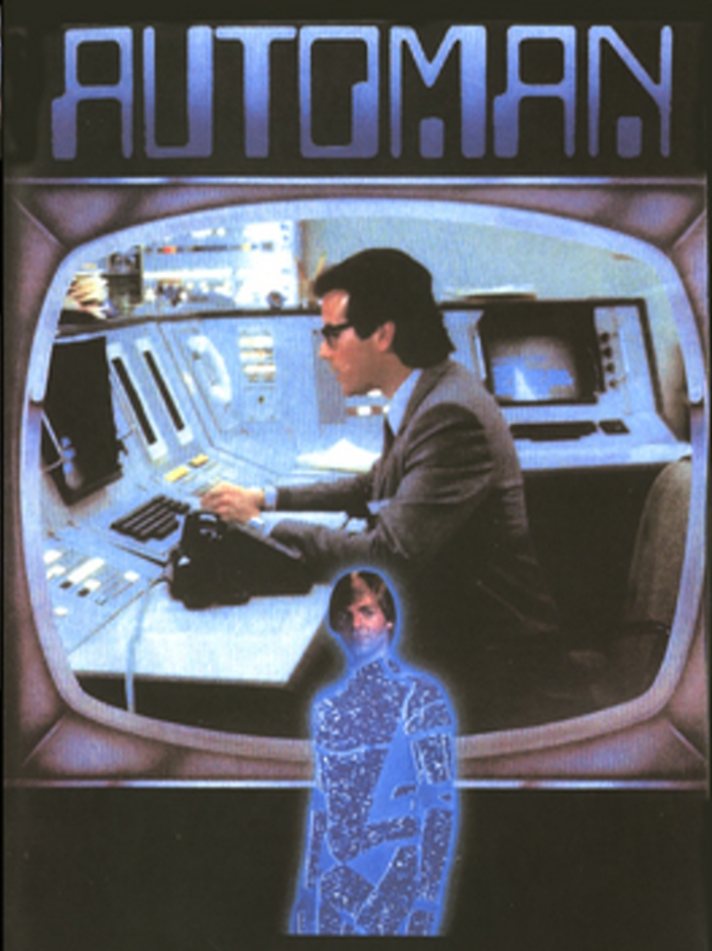 While in the real world, Automan posed as a government agent who helped Walter by the name of "Otto J. Mann." This was a secret to all the regular characters, except Walter's close associate, Roxanne Caldwell (Heather McNair).

Nebicher could merge with Automan to become one being, sharing both consciousness and skills, while retaining Automan's invulnerability to such things as gunshots and explosions. During the "merges" only Automan's form, a human head atop a glowing body made of circuit patterns and flickering light, could be seen.

Automan had a sidekick named Cursor, a free-floating, glowing, shifting polyhedron-shaped, mote of energy which could three-dimensionally "draw" and generate physical objects as they were needed, generally becoming the object in the process. Cursor could not become another object until dissolving the current object (usually a reversal of the "drawing" effect) and reassuming "his" normal form. Exceptions to this included the fabrication of more conventional outer clothing to hide Automan's unusual body appearance, and a variable dark colored vehicle lined in glowing blue piping. Jokingly referred to as the "Auto Mobile" in one of its earliest appearances, the most common forms taken were a car, a plane, and a helicopter, all of which could defy the laws of physics such as making a 90-degree-angle turn.

Cursor could make the vehicle appear or, by making contact with it, cause it to change from one form into another, such as shifting from a car into a helicopter, and could then detach in order to perform other tasks. Cursor could create vehicles with a more conventional appearance but could not then separate from them as he did the unusual-looking forms without the object dissolving. It is also notable that Cursor was always the first to appear from a computer, after which he immediately "created" Automan's physical body. Automan and Cursor were generally only able to become corporeal at night, since running both had enormous power requirements.

Automan was the only TV program to feature the use of a Lamborghini Countach as transport; the Auto Mobile's most common form was such a car. When driving, Automan turned his car at 90 degree angles (a result of Nebicher's programming). Automan was unaffected, but his passengers were generally knocked from one side of the car to the other.