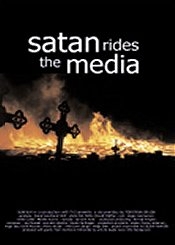 Norwegian documentary  Satan Rides the Media, which traces the tumultuous history of black metal through the early Nineties, when a string of church burnings turned the nation's eyes toward a small group of sinister metalheads. More specifically, the film spotlights Varg Vikernes of the one-man band Burzum, and his involvement in the burning of the historic Fantoft stave church in Bergen. After a journalist interviewed Vikernes (who later changed his name to Count Grishnackh) and he confessed, the media went buck-wild with the satanist slant, and they portrayed the metal scene as black-clad, evil-obsessed devil worshippers with no remorse and a penchant for hoarding animal heads. Vikernes adored the media attention, and even used photos of the churches he burnt (three in all) on the cover of a Burzum album. (This would become briefly popular, as the band Mayhem used a photo of bandmate "Death" on the cover of an album, shortly after he blew his brain out with a shotgun.) Vikernes, however, had a more traditional reason for burning the churches. "The church [in Norway] has behaved so disgracefully," says a clean-cut Varg from prison. He reasons that he was just trying to save Norway from Christianity and return it to its pagan (not satanic) roots.