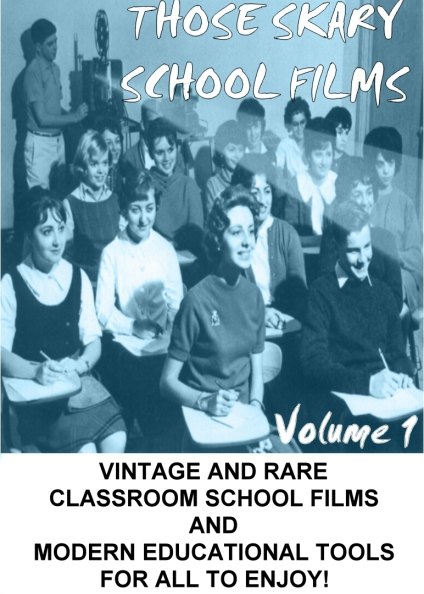 2 hours of Skary School Films on DVD.  Included below:

EXTREMELY CAMPY 1969 Educational Film THE SANTA MONICA PROJECT. Excellently goofy dialog throughout! This film was to be used as a modernized educational tool for EDUCATIONALLY HANDICAPPED students. We get to see in full color some really bizarre and quite WEIRD ways to handle the educationally handicapped types: THE BULLY, THE HYPERACTIVE CHILD (in this case, we hear the announcer name this student almost every time as HYPERACTIVE TODD, THE WITHDRAWN STUDENT, ETC. You'll see strange teaching methods that seemed to reward students for just showing up on time by giving them squirt guns and candy, you'll see the large banquet style tables given to the hard to deal with students (I guess they needed more desk room to concentrate?), and you'll experience the elderly teachers aide who on a daily basis takes the bad seeds out to exercise! (Note the photo below of this wonderful educator doing jumping jacks in her house dress and high heels).

LSD educational film. "LSD: Insight or Insanity," 1968. Actor Sal Mineo narrates this classic educational drug warning film from 1968. (Sadly, Mineo's best film roles were over by 1968.) From all of the LSD films produced for the educational film market during the late 60's and early 70's, this is by far the most entertaining. The film manages to capture the "look" and "feel" of the wild and weird late 60's drug scene. You'll visit an acid freak-out party, with multi-colored lights flashing, and even some subliminal scenes flashed across the screen for the ultimate viewer trip.  See these robot like scientists and doctors claim that LSD causes cancer, horrible birth defects and insanity. Simulated bad (bummer) trips such as seeing a flower in the flame of a stovetop, riding a tricycle down a flight of stairs and jumping out in front of a moving car for no apparent reason. The last scene in the film is the one that everyone from the 60's remembered. It's the "final" trip for some unfortunate acid users.

Truly a splendid look at 1960 cafeteria culture hosted by another annoying puppet, MR. BUNGLE. The rude, clumsy puppet Mr. Bungle shows kids how to behave in the school cafeteria - the assumption being that kids actually want to behave during lunch. This film has a cult following since it appeared on a Pee Wee Herman HBO special.

THE RIDDLE OF THE FRIENDLY STRANGER

A warning about child molestation, it's The Riddle of the Friendly Stranger. Hosted by a deranged housewife (The Puppetmaster) and her dummy named Gabby, who asks a never-ending series of tedious questions about who is and is not a stranger. Things take a turn for the grim when it's final exam time: two men are shown, one of whom is okay and the other is a "sick or dangerous" stranger. At first glance, it's obvious who's naughty and who's nice: one man is a well-groomed, smiling fellow while the other is a sullen, scar-faced nightmare. It turns out, though, that scar-face is actually a cop while the "nice" man tries to lure a little girl into his car. TRULY TERRIFYING TO WATCH!

Excellent yet slightly disturbing look at 1975 gender roles in the home. A young teenage boy is embarrased by the fact that his mother is the breadwinner and his dad stays at home cleaning and cooking. Things take a turn late in the film when the boy steals the family motorcycle and Mr. Mom has to capture him and punish him. SPLENDID!