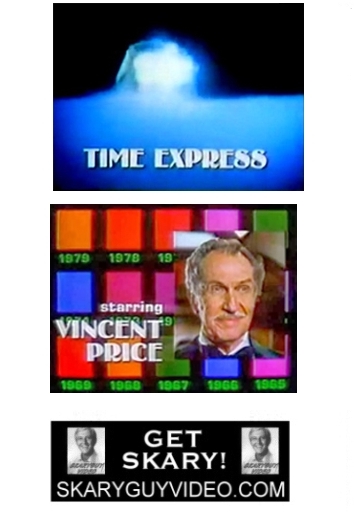 Jason and Margaret Winters were the sophisticated hosts of the Time Express, a train which took its passengers back in time to relive a momentous moment of their lives.

The series is in anthology format, similar to other dramatic television series on American networks of the time such as The Love Boat and Fantasy Island. Each episode consists of two tales featuring guest actors.

The show stars the husband and wife team of Vincent Price and Coral Browne, playing the roles of Jason and Margaret Winters, the sophisticated hosts of the Time Express, a train that takes its passengers back in time to relive a crucial point in their lives. The train is staffed by James Reynolds as the conductor R.J. Walker; Woodrow Parfrey as the ticket clerk; and William Phipps as Engineer Callahan, who collectively appear in the first three episodes.

Due to the age and source of these compliled classic tv programs, some episodes visual and audio quality may vary, however we hope this doesn't detract from your enjoyment of this, one of the all time favorite tv shows!