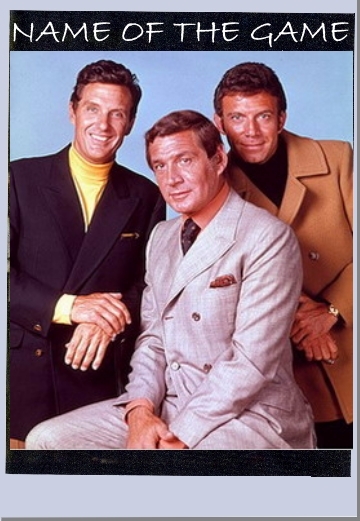 NAME OF THE GAME

The Name of the Game is an American television series starring Tony Franciosa, Gene Barry, and Robert Stack that ran from 1968 to 1971 on NBC, It was a pioneering wheel series, setting the stage for The Bold Ones and the NBC Mystery Movie in the 1970s. The show had an extremely large budget for a television series.

The series was based on the 1966 television movie Fame Is the Name of the Game, directed by Stuart Rosenberg and starring Tony Franciosa. The Name of the Game rotated among three characters working at Howard Publications, a large magazine publishing company Jeff Dillon (Franciosa), a crusading reporter with People magazine (before there was a real-life People magazine); Glenn Howard (Gene Barry, taking over for George Macready, who had originated the role in the earlier film), the sophisticated, well-connected publisher; and Dan Farrell (Robert Stack), the editor of Crime magazine. Serving as a common connection was newcomer Susan Saint James as Peggy Maxwell, the editorial assistant for each.

NAME OF THE GAME 17 DVD SET